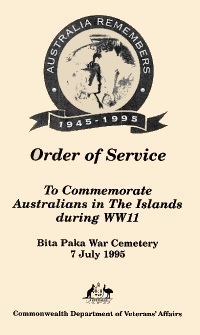 ‘Beyond the capacity of a small garrison’
The fate of Lark Force, Rabaul, January 1942
Speech by Dr Richard Reid, Australian War Memorial

Few memorials in Papua New Guinea reveal a more tragic story than the Rabaul Memorial. Located at the Bita Paka War Cemetery, the Memorial is an avenue of stone columns to which are attached bronze plaques displaying the names of 1224 Australian servicemen. These are the “missing”, those with”‘no known grave” from the fighting in New Britain and New Ireland. It is the largest single list of its kind from any battle area in which Australians fought in Papua New Guinea between 1942 and 1945. The story of the Rabaul Memorial is predominantly, although not exclusively, the story of Lark Force, that small garrison which faced the full onslaught of the Japanese on New Britain on 22-23 January 1942.

In January 1942 Rabaul was Australia’s front line. The town was closer to the great military base of Truk in the Japanese Mandated territory of Micronesia than it was to Cairns. But there were no Australian forces in Cairns, or anywhere else, capable of coming to the rescue of the inhabitants of Rabual should they be attacked. If the Japanese came, who would defend the town?

In 1941, not wishing to totally abrogate its responsibility for this outpost of Australia, the Australian government sent Lark Force to Rabaul. On Anzac Day 1941 the bulk of the main unit of Lark Force, the 2/22 Battalion of 23 Brigade, 8th Division AIF, arrived in Rabaul. In all there were about 900 men and 38 officers in the battalion. By December, as the Japanese struck south into Malaya towards Singapore, the force had grown to 1400 with the addition of a detachment from the 2/10th Field Ambulance, the 17th AntiTank Battery, some men of the New Guinea Volunteer Rifles and other units manning the fortress guns and anti-aircraft guns. There were also six nurses of the Australian Army Nursing Service.

What were these few expected to do against the might of a Japanese invasion force from Truk? On 12 December 1941 the Chiefs of Staff in far away Australia decided there should be no withdrawal from Rabaul. In a submission, endorsed by the war Cabinet, the Chiefs recommended that Lark Force should not be reinforced and conceded that a Japanese attack would be beyond the capacity of the small garrison to resist. In a more ominous phrase they described Rabaul, and its garrison, as hostages to fortune.  Even before the Japanese appeared it was acknowledged that they would conquer New Britain.

On 22/23 January the Japanese came. The men of Lark Force did what they could to resist the enemy. A particularly sharp action was fought by Major Owen’s company of the 2/22nd, who deterred a Japanese forward advance from their initial landing point. Enemy flanking movements eventually forced Owen’s men to retire. At dawn the watching Australians could see the extent of the Japanese invasion force: 31 ships at the harbour mouth, three destroyers in the harbour and landing craft and barges everywhere. Scattered Australian units defending various sites around the Gazelle Peninsula near Rabaul soon found their communications with headquarters had been cut. By mid to late afternoon organised Australian resistance was over. Disorganised parties of soldiers withdrew towards the north and south coasts of the island.

On 23 January Lark Force virtually disappeared from view. The first to emerge from New Britain were about 400 men in small groups, who had managed to escape to the mainland between February and April. Theirs was an epic story of danger, sickness, hunger and great hardship. They brought reports of an event likely to cause enormous fear and worry to families with men in Lark Force: the Tol Plantation massacre. On 6 April the massacre was reported in the newspapers.  It had got past the censor in error. So Australians discovered that at Tot Plantation the Japanese had shot or bayoneted approximately 160 surrendering soldiers and civilians. But there was no word of precisely who had been killed.

On 28 April came the letters.  Japanese aircraft dropped over Port Moresby brown paper packages containing letters from approximately 400 Australians imprisoned in Rabaul. They were from planters, government officials, Australian Army nurses, businessmen and soldiers of Lark Force. The Japanese said this mail drop was to relieve the anxiety of the prisoners’ families. From the letters it was deduced that many of those who had disappeared in January were alive in Rabaul. Benign quotes were released to the press:

We are getting used to a diet of rice, fish and milk.
We have mass every Sunday.
A large number of Japanese soldiers speak English very well, and we often converse with them.

While the mail drop could not totally dispel anxiety about those who might have died at Tol, or from whom no letter had been received, families could feel that many of the POWs and internees had survived.  Nevertheless, anxiety increased during the remainder of the war when the only news from Rabaul POWs came from a small number, all officers, who had been sent to Japan. Eventually the nurses were discovered there too. But why was there an absolute silence from all the others?

On 22 August 1945, after the official Japanese surrender, a message was sent to the Japanese in Rabaul. It asked for details of all POWs, civilian detainees and Chinese being held in the area. What the Australians wanted to know was the whereabouts of about 1000 men of Lark Force, the 100 or so aircrew and coastwatchers who had been captured after January 1942, and approximately 1550 white civilians who had not been evacuated before the Japanese invasion.  According to historian Hank Nelson:

Of all the 23,000 Australians who had been taken prisoner of war or interned by the Japanese, the ones Australians knew least about by August 1946 were those captured on Australian territory.

The Japanese reply was bewildering. They were holding just 28 European POWs and 158 civilian internees. In addition there were 5463 Indians, 1397 Chinese, 688 Malayans and 607 Indonesians. No offrcial communique was possible regarding the whereabouts of the missing men of Lark Force. On the broken slabs of the Lark Force camp, Malaguna Road Barracks, Australians discovered a few soldiers names etched into the cement. That was all.

It was now over a month since crowds had danced in Australian streets to celebrate VP day and there was no sign of the majority of Lark Force. The agony of the families continued.

Even more puzzling were the 18 British POWs among the 28. They turned out to be the only survivors of 600 British artillerymen brought from Singapore to labour for the Japanese on the Solomon Islands. The unidentifiable bodies of 438 of these unfortunate soldiers were discovered and buried at Bomana War Cemetery, Port Moresby.

Only after exhaustive inquiries in Japan, and elsewhere, did the truth emerge. On 22 June 1942, 849 POWs and 208 civilians had embarked at Rabaul on the Montevideo Maru, bound for Japan. At dawn on 1 JuIy 1942, six miles off Luzon, an American submarine had sunk the ship. Not one POW or civilian internee survived.

By 17 October 1945, official Army casualty lists began appearing in the newspapers. Of all those whom the Australians were seeking when they returned to Rabaul only about 200 were found alive. For most of the men of Lark Force their only grave was the sea or the bush at Tol Plantation, where those massacred had never been properly buried. That is the story behind the great majority of the names on the Rabaul Memorial.

The Europeans were not the only ones to suffer during the occupation. When the first post-war Australian patrol returned to the Lemingi village of the Baining people it found there 73 of the 96 who had lived in Lemingi before the invasion. Thirteen had been killed, either by the Japanese or in allied air raids. The rest—the very young, the old and the sick— had succumbed to disease and illness brought on by malnutrition and food shortage. The villagers had become reluctant to plant their gardens as the produce was either expropriated by the Japanese or they were bombed. In general the Baining villages suffered a decline in population of between one third to one half as a result of the war.

For most Australians death in war has been some thing that happens elsewhere: in prison camps or on battlefields far away. But in 1942, when the Japanese came to Rabaul, New Britain was part of the Australian Mandated Territory of New Guinea.  The welfare of the native people of New Britain was an Australian responsibility, as were the Australian born who had made their homes as planters, businessmen or government officials on the island. When peace came in August 1945, and there was rejoicing in the streets in the great cities of the south, Mrs Phyllis Manson, a widow, found out what had happened to her family under enemy occupation.

Her daughter, Majorie Jean Manson, had gone to Rabaul with her son, Richard, aged six, in 1937. She married Ted Hervey and she and Richard went to live on Ted’s plantation. Sometime in 1942 the Herveys were arrested by the Japanese for espionage, tried and executed by firing squad. One of the Japanese present said:

[It] was a miserable scene and the parents had clasped hands with the boy between them.

In 1945 Australians once more ruled at Rabaul.  They heard what had happened to young Richard Hervey, one of a now estimated sixty million dead, soldiers and civilians, in the Pacific, in Asia and in Europe. His was one tragedy among all those Australians and Papua New Guineans who had vanished during three years of enemy occupation of the Gazelle Peninsula.

Soon all the public ceremonies, marches, pilgrimages and commemorative events of this anniversary year will be over. Eventually, too, the men and women who lived through the war, and experienced its grief and horror, will pass into history. Then Australia will need the stories of Lark Force, the villagers of Lemingi, and Richard Hervey to understand what war did to those who fell into enemy hands on a nearby island under Australian rule.

(I am grateful to Dr Hank Nelson of the Australian National University for sharing his extensive knowledge of the war in New Britain with me.) 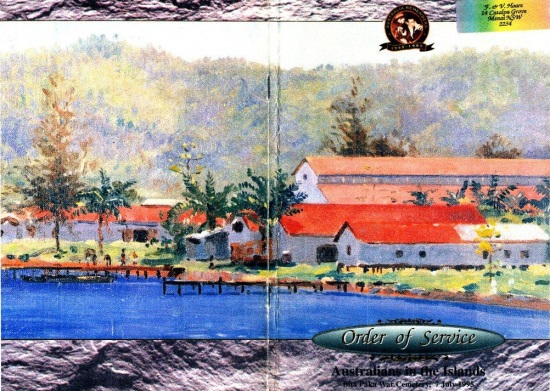