The Hon Peter Garrett AM MP 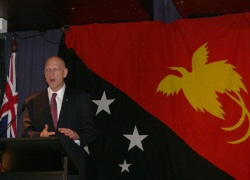 I want to begin by acknowledging the Aboriginal people of this land, the Ngunnawal people.

As we gather to mark the occasion of the 69th anniversary of the sinking of the Montevideo Maru, as patron of the Society, I want to offer my continuing support for your endeavours, especially your efforts in this crucial year of fund raising activities.

The sinking of the Japanese merchant vessel Montevideo Maru by the submarine USS Sturgeon on July 1 1942, saw the greatest single loss of life—over 1,000 people—in our nation’s wartime history.

The fact is that this was Australia’s greatest maritime tragedy, yet still remains one of Australia’s least well-known events.

The sinking of this vessel crammed with prisoners of war—soldiers and civilians—-following the fall of Rabaul is still, for the most part, off the radar when we think of the history of World War Two.

But I’m pleased to say that is changing.

This is due in no small part, to the tireless efforts of the Rabaul and Montevideo Maru Society and other organizations dedicated to increasing awareness of this momentous event.

As well family members of those who lost their lives, along with a number of military historians are drawing our collective attention to the terrible night of July 1 1942 when, after being pursued for days, the Montevideo Maru was sunk by torpedoes launched from the US submarine SS Sturgeon whilst en route to Hainan.

There were few survivors amongst the crew and guards, but all prisoners of war and civilians on board were lost at sea.

It is long overdue that this event is appropriately recognised and commemorated, including by the placement of a memorial at the Australian War Memorial here in Canberra.

It is encouraging the arrangements are now underway for that to happen with a site at the East Precinct now identified and agreed.

My Grandfather, TW (Tom) Garrett, who had settled in New Britain following the Great war and owned and managed the copra and cocoa plantation ‘Varzin’ at Kokopo south west of Rabaul, was one of those civilians who lost their lives.

I note that Max Henderson writing in the Rabaul and Montevideo Society Memorial News 26 describes him as a “…hail-fellow-well-met who didn’t mind a drink from time to time.” Thank you Max for filling in some gaps in my knowledge about my grandfather!

I wrote about this in the Midnight Oil song In The Valley, released on the Earth & Sun & Moon album.

My reflections are similar to some others I’ve since read, in as much as the family knew relatively little about the history of the MVM, had few mementoes or means of honouring his death and never saw the event prominently commemorated.

As we know, official notification of the sinking of the Montevideo Maru was not provided until October 1945.

The conflict in the Pacific was yet to reach its zenith with the Battle of the Coral Sea just ended and the contest at Guadalcanal still ahead.

But I think we can say from the vantage point of the present day that the constant demands of wartime meant attention was easily diverted, lines of communication were fractured and little information was offered by the Japanese authorities.

In the ensuing seven decades individual families would have remembered and mourned their loss, even if the nation then did not, and the lack of public profile in no way lessened the intensity those with connections to the many who perished would have felt.

But now the passage of time and the enormity of the Montevideo Maru’s sinking combined with the absence of pronounced, formal recognition brings us here today.

I am pleased that it was under a Labor government that important acts of recognition, long overdue are now in train.

Here the work of the society, still in relative infancy, has been crucial. It was a welcome step when the Parliament only last year on June 21, resolved amongst other things to:

‘Express its gratitude to the service personnel and civilians in Rabaul and PNG, … as well as … it’s sorrow and regret for the sacrifices made in the defence of Rabaul and in the subsequent sinking of the Montevideo Maru and …conveyed its condolences and thanks to relatives and loved ones for their forbearance over time.’

I want to acknowledge the role played by my colleague, the former Minister for Veteran’s Affairs the Hon Alan Griffin for his help at that time.

We owe those who lost their lives and their families the dignity of the more formal and public recognition the Society has championed.

This is something I know the Australian public if they were aware of what happened then would very much support.

After all we remember the gallantry of Gallipoli and the sacrifice of the Somme – indeed the anniversary of the Battle of the Somme and the sinking of the Montevideo Maru are shared.

We remember the suffering of the Burma Railway, the stoic heroics of the Kokoda track. The legacy of the controversial Vietnam conflict is ever present.

The fact is that the tragedy of young men sent early to their grave is one that resonates across our national psyche. War in all its terrible ugliness also sweeps up in its path the non-combatant, the civilian, the innocent bystander as well.

And on this fateful day in July 1942, some 1053 lost their lives, not as a consequence of any decision they had made, nor as an act of aggression by those who were then our enemy.

But instead, as collateral damage, an unintended consequence of the confusing tempest that is war.

May they rest in peace and may our efforts over the next year to raise the profile of the sinking of the Montevideo Maru crucially raise the funds to have in place a memorial for those who passed on and whose memory families and the nation all cherish.